my loving fiance asked me to post a video of something magical that we recently experienced together... so here is the video of the cliff diver at casa bonita. it wasn't until this video was uploaded that eric decided that he wanted to share my blog with his friends (hehe, love you eric!) enjoy!
Posted by Unknown at 6:15 PM No comments:

while still in iraq, eric had planned a trip in colorado for us. we were in the winter wonderland for a little over a week and it was as beautiful as it was cold! the second night that we were there was the coldest it had been in colorado since 1901! but that didn't stop us from having an amazing time. we stayed in a town called granby, and while there went to a resort nearby called winter park.
here we are at winter park with brent and apryl: 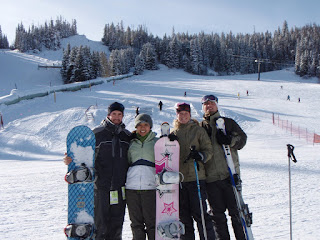 eric, his cool guy sunglasses, and me at the top of winter park: 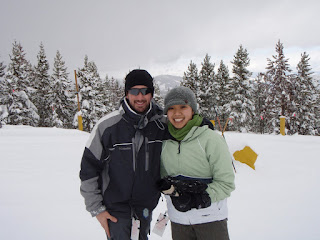 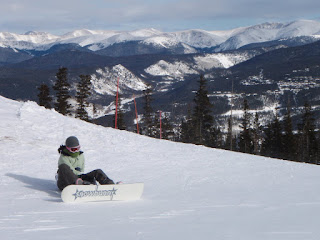 we were fortunate enough to visit breckenridge (snowbunny picture above) and the view in the photo does not do it justice. it was simply gorgeous up there. i fell pretty hard shortly after that photo above was taken, and the end of that day was our final day of snowboarding, but our fun in colorado certainly did not stop there.
for you south park fans, this is a picture of the casa bonita: 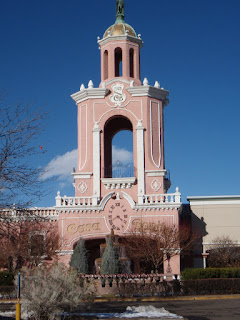 we visited the denver zoo while they had christmas lights up: 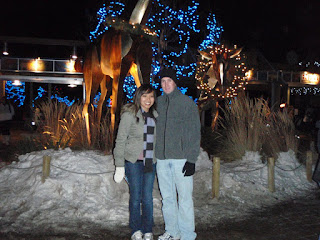 they had my favorite zoo animals... 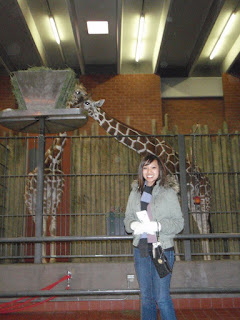 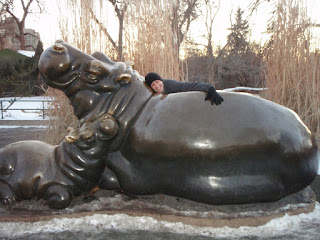 the following day we had time to visit the downtown aquarium: 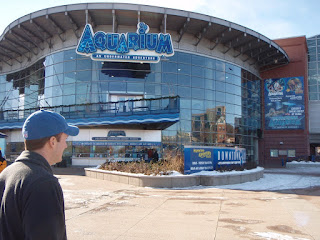 here i am gearing up for a shark feeding (ok, not really): 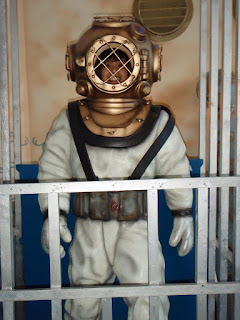 after the aquarium, we went to golden and toured the coors brewery: 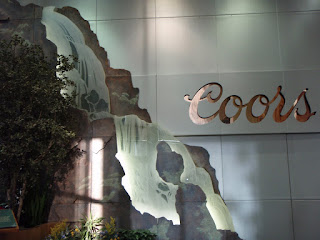 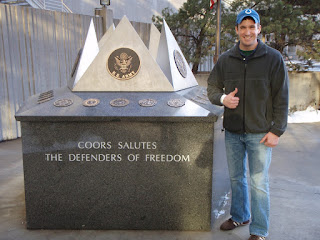 it was an extremely fun-filled vacation and it definitely will not be the last time we'll be visiting colorado.
Posted by Unknown at 8:43 PM No comments: 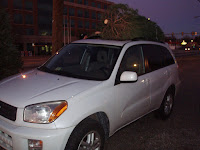 and here is a photo of our little family in front of our unfinished christmas tree: 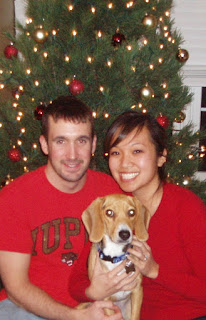 while eric was still in iraq, i went to visit several wedding reception venues and it really got rather overwhelming. i was about ready to throw in the towel when eric emailed me and asked me to check out fort belvoir's officer's club. i went and absolutely loved what i saw. i reported to eric and he told me to go ahead and put the deposit down and we would settle the details when we got back.
eric went with me today to see the officer's club at fort belvoir, and he liked what he saw so it is now official! we are getting married on october 3, 2009! if you haven't already, please send me your addresses and expect save-the-dates soon!
here's a little teaser photo of the place: 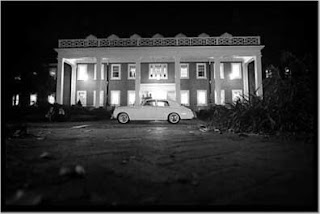 now that we have a date and place, planning is becoming a lot more fun!
Posted by Unknown at 8:56 PM No comments:

too precious for words

it is with pure love and joy that i introduce you to the newest additions to the family... my nephew and my niece, aidan and brooke, who's proud parents are my sister, thi ngo, and my brother in law, michael lam:
aidan michael lam - 4 lbs 6 oz 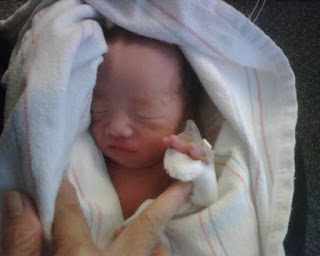 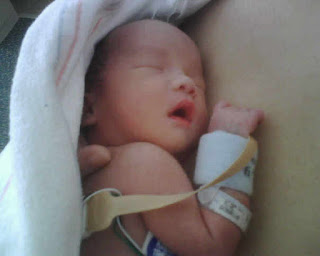 i don't think i have ever in my life seen anything so beautiful-- i can't help but tear up when looking at these photos of my perfect little niece and nephew. i cannot put into words how badly i wish i was home to be with my family at this happy time. i am so proud of my sister and my brother-in-law and am so happy for them. there is no doubt in my mind that they will be amazing parents.
congratulations anh chi hai! please give the babies a kiss and a hug from their di ba and tell them i think about them every day and i can't wait to give them those hugs and kisses myself! i love you all!
Posted by Unknown at 2:45 PM 1 comment:

we have been up and about since 4:30 this morning and at 8am we got quite the holiday wish come true. my wonderful fiance along with about 300 other indiana national guard soldiers returned home safely today from a 9-month deployment. we got to spend one precious hour with our soldier before he and the others had to get back on the bus to head out to fort atterbury for demobilization. but in the next couple of days, they will be home sweet home, and boy does it feel good. i am loving every minute of it, i cannot imagine how they must feel.
eric's niece, lexi, happens to be in the same 1st grade class as the daughter of an indiana news reporter, so here we are making a little appearance in the news story on theindychannel.com: 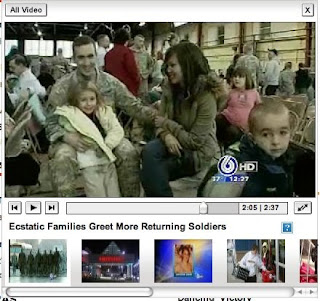 eric is all smiles to be home and we are all smiles to have him home.
shout out to you, hubby-to-be. let the wedding madness begin! <3
Posted by Unknown at 9:04 PM 1 comment: 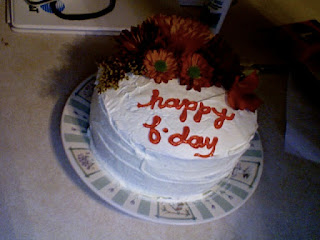 on sunday, indy (my beagle) and i made the drive from virginia to indiana and tomorrow we will be seeing eric for his home-coming from iraq! but today also happens to be my future-mother-in-law's birthday, so while staying in her beautiful home, i decided that i wanted to bake her a cake. the intentions were to bake her a red velvet cake, but we are all aware of the reputation i hold as a chef... so i made a mistake and picked up banana cream pudding instead of the vanilla pudding that is in the red velvet recipe that i use... so instead, its just a chocolate cake. well, not just a chocolate cake-- its a chocolate cake baked with love.
Posted by Unknown at 9:51 PM 1 comment:

as far as cooking goes, i've come a long way ever since i first moved to virginia. my first few days of complete independence, i managed to blow up a hot dog and drown mac and cheese in too much milk. since then i've experimented with baking some casseroles, followed some rachel ray recipes, etc. well for dinner tonight, i decided to make myself a grilled cheese sandwich. i buttered two pieces of bread, and put one on the pan, followed by extra sharp cheddar cheese, and some sun-dried tomatoes. sounds good right? i'm sure it would've been delicious had i not burnt one side of the sandwich. oh well...
Posted by Unknown at 5:54 PM 1 comment: 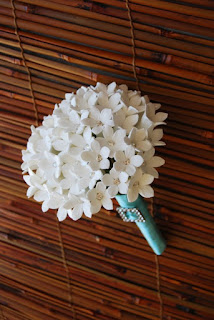 i absolutely LOVE this bouquet! it is a little unrealistic for me to have swarovski crystal centered stephanotis, but a girl can dream can't she? i really do like the details of the ribbon and i think if i can show someone this picture or get creative with my description, i can have a similar bouquet made. maybe use other cream flowers, roses even?... again, i am terrible at this sort of stuff. i know i like it, but i'm not really sure how to make it happen. i also always hate making decisions so early because i always want to change my mind later down the road... again, except for when it comes to the groom. ;)
anyway, expect pictures of other bouquets to come up! i'm sure this is the first of many that i will simply love!
Posted by Unknown at 10:18 PM No comments:

well, here we go again. chi hai thought it would be a good idea for me to start blogging again, especially with the recent engagement and the starting of all this wedding planning, and so here i am... blogging yet again. i am terrible about blogging, even though i do enjoy it.
eric comes home for good in a few days. i cannot believe we're down to days. anyway, those stories of brides who are always happy and excited to plan their wedding... that is definitely not me. don't get me wrong, i love eric and i am so excited to marry him, but i completely suck at planning. i like too many things and i hate making decisions because i always want to change my mind. so far, we have agreed on a chocolate brown and tiffany's blue color scheme and we want to have cupcakes instead of a traditional wedding cake. but like i said, i am fickle about all the decisions... except the groom, of course.
here's hoping i'm good about blogging this time around. i am excited to post pictures and links to things i like and look back on it after the wedding gets here to see the progress of it all.
Posted by Unknown at 11:19 PM 3 comments: