this past weekend, eric's mom flew in to pay us a visit. if you ask me, she didn't stay nearly long enough, but we spent her time well and it was a visit packed with fun and laughter. eric and i picked her up at reagan national airport and headed straight to old town for lunch. afterwards, we dropped off eric at work and spent some girl time at yvonne's hair and nails (for those of you who follow my blog, this is indeed the spa where bao and i experienced the fish pedicure). i then took her to grand mart where she got to see the wonderful chaos that is an international supermarket. we met up with eric and headed to national harbour where coincidentally it was restaurant week. we ate at bond 45 and shared the entire restaurant week menu-- it was delicious. it was freezing out, so instead of walking outdoors, we did the next best thing-- walked indoors at the gaylord national. 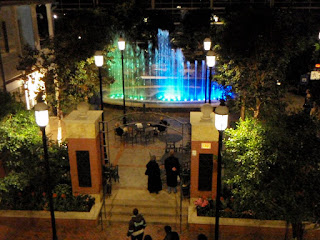 we kicked off the next day in china town and had dim sum (for her first time!) 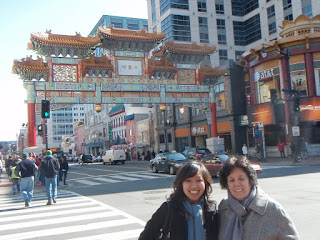 afterwards, we visited the newseum (that is not a typo!)

it was such an interesting museum! its hard to describe it, but its basically filled with all the big events that were ever documented, it was jam packed with history-- it covered just about every major event you could ever think of. i was extremely moved by their tribute to 9/11. for you locals, i highly recommend you visit the newseum; you won't be disappointed!
that night, we put together a meal with the groceries we bought at the market. eric grilled some bulgolgi and i made some kimchi fried rice. we just sat around, ate dinner, and ended the evening watching "bedtime stories".
the next morning, we got up, attended church, and ate brunch at the silver diner. we had a few hours to sit around and chit chat (indy had a few more hours to sit on grandma's lap) and it was time to say good-bye. the weekend was a lot of fun, and you know how time flies when that happens!
Posted by Unknown at 10:56 PM