... a pirate's life for me! Last weekend I got with a few friends to partake in the DC Challenge. If you're not interested in clicking the link, its an urban scavenger hunt. Picture amazing race, but in DC. Costumes were optional, but naturally we went that route. We decided to run throughout the city dressed as pirates: 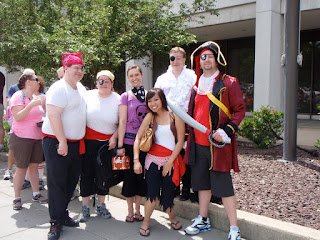 At around 2ish, about 250 teams (that's a LOT of people) gathered by Union Station to get our set of clues. They handed out 12, and we were to complete 11 and meet back on the mall by the Washington Monument. We were only able to complete seven (and a half, but by the time we got to our 8th destination, it was being closed...). It was a hot day in DC, but it was so much fun and this is definitely something we'd hope to do again. 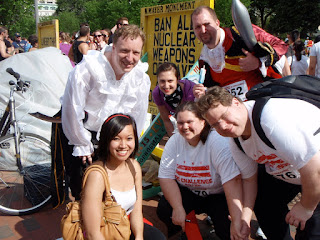 Here our clue read: "In the park named for a famous Frenchman, Conception Picciotto has been protesting nuclear weapons more or less nonstop since August 1, 1981; She's watched over five presidents from her prime spot. If she's not there, or is sick of DC Challengers, a photo with her tent and signs will do."
This took place right infront of the white house. There just so happened to be a rally going on that day (really? in DC?...) but we managed to squeeze ourselves to the tent pictured behind us. 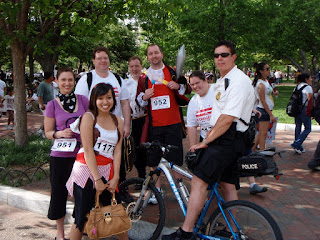 "DC has more than a few crime fighters: if they've got a badge and a gun, take a picture with them. It shouldn't be hard: in DC you'll find 1,800 Capitol Police Officers, 1,300 officers of the Secret Service's Uniformed Division, and 4050 officers of the Metropolitan Police Department."


This officer was patrolling the rally, but didn't mind to smile in a picture with a bunch of crazy kids dressed as pirates.
Posted by Unknown at 7:31 PM