I love Eric Oberly! This past weekend, Eric took me to NYC to celebrate our first year of marriage. I remembered thinking last year on our wedding day that there was no way anyone could love another person more than I loved Eric. And yet here I am, one year later, finding myself loving him more now than I did even then. Yes, the rest of this post will likely be this mushy. Consider yourselves warned!

The first gift in paper form were train tickets from Alexandria to NYC. When we got there, we walked up a few blocks to the Distrikt Hotel, a charming yet modern hotel tucked away behind Port Authority, close to Times Square. We were told by several friends that the top of the Rockefeller Center was the way to go as far as getting a great view of the city. They were absolutely right, but unfortunately we were unable to get any great photos to prove it. This one will have to do: 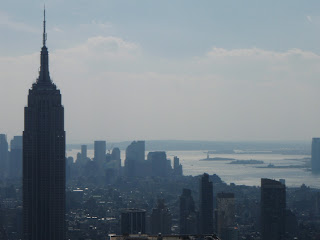 We grabbed some pizza on our walk back to the hotel and got washed up to partake in the second gift in  paper form... tickets to see "Wicked". This was our first time seeing it and I wish I could put into words what it did to me. I thought it was absolutely amazing, and was embarrassingly giddy after leaving the Gershwinn Theatre.
We had amazing front-row balcony seats: 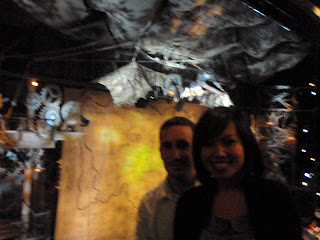 The next day was designated Central Park day. We walked around beautiful Central Park, visited its zoo, then followed up with a visit to the American Museum of Natural History. We stopped by McGee's for lunch (McGee's is the bar that inspired Maclaren's in "How I Met Your Mother"). While there, we ran into some Colts fans that told us that Keats was where NYC Colts fans caught the games. Of course, we headed there! 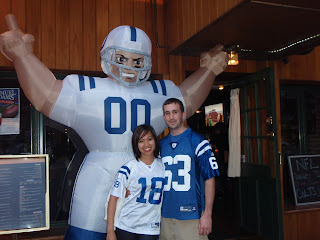 The next morning and the entire day, it poured in NYC. We already had tickets to take the ferry to Liberty Island, so we sucked it up and went. Because of the rain, we were unable to get any great photos with the Statue of Liberty, but believe me when I say she was a beauty! Before heading back to the hotel room to relax, we took the subway to Momofuku. I had heard great things about their pork belly buns and their compost cookie and will report that I very much enjoyed both! After lunch, Eric and I gave our feet and legs much needed rest before getting dolled up to go to Daniel Boulud's restaurant, Daniel. This was, hands down, the best meal of my life! And as good as the food was, the service was equally great. We were completely spoiled there, as our server knew it was our anniversary. I don't know who told him that sweets were the way to our hearts, but we ended our 3 course dinner with 6 (count them) desserts! The restaurant was way fancy, and I really hope we'll get to experience something like that again. 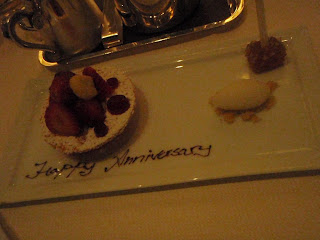 And as if those 3 days weren't enough, Eric surprised me with a present that was a year in the making. He started a journal in October 2009, comprising thoughts and memories we shared throughout our first year of marriage, with intentions to share them with me for our 1 year anniversary. He definitely still knows how to make my heart go pitter patter.
It was such a wonderful weekend. I can't even tell you how great I still feel from the high of it all. I love my husband, and I am really looking forward to all the things our second year of marriage will bring!
Posted by Unknown at 6:54 PM