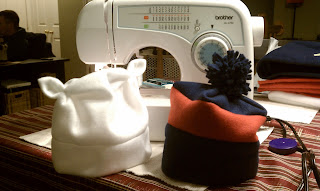 A few weeks ago, Chi Hai got busy on MarthaStewart.com and emailed me several crafty links, including these simple yet adorable fleece hats. So this afternoon, as a sick Eric Oberly was under the weather and under his snuggie and overdosing on Sunday football to feel better, I declared that I was bored. To remedy my boredom, I got dressed and headed to the fabric store to fulfill these custom order hats for Aidan and Brooke.

I had used online templates/directions before, and I often find that they aren't always as easy as they claim to be. I actually made a prototype of Brooke's before I decided that I actually can commit to making these.

Brooke's hat is a white polar fleece. Before the ears, if you lay the hat flat, it actually looks like a rectangle. To make the ears, I tied the corners together, and secured the shape by hand-stitching. As previously mentioned, I had practiced this hat so I knew it was doable. So as soon as I finished it, I had to come up with a game plan for Aidan's.
Aidan's was a little bit trickier, with the horizontal stripe going through it. Okay, it wasn't that much harder, but it was important to me that the stripe was perfectly even all around, and that was a little bit of a challenge. But just as the rule of construction, I measured twice and cut once and was successful upon first try. The second challenge was the pom-pom. I wasn't confident that I understood the directions correctly, but I trusted my instincts and got lucky a second time, and that too turned out. Like Brooke's hat, this one also looks like a rectangle right before the finishing step. All that needed to be done was sewing the corners together, then pulling the corners directly down the top center of the hat, and topping it off with the pom-pom.
Now I'm usually not very confident that things I sew will last after one wear. This one is no exception. I'm hoping that after their snow trip, Brooke won't come back with a one-eared hat, and Aidan won't end up with a rectangle on his head. Have fun, kids! Di Ba misses you!
Posted by Unknown at 9:55 PM