This year Riley started her pre-kindergarten class. She spent the summer transitioning into the new class with her former teacher. The teachers decided to challenge the kiddos and put on a spelling bee.

We received a list of words for Riley to practice. And practice she did-- we made flashcards, we placed them into stacks to know which words she knew and which words needed more work. She studied right until the morning of the spelling bee.

The teachers did an awesome job setting up the spelling bee in its true format. The class full of 4-5 year-olds sat in two rows, and one by one, each child was called up to the front and given a word to spell. We watched Riley breeze through words like "bat" and "frog" until it was down to her and one other child. The other child was given the word "star," a word that was also one of Riley's more challenging words. The other child misspelled it, and in true spelling bee form, Riley had to correctly spell "star" to clench the spelling bee championship. And that she did! 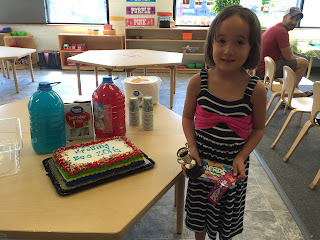 I have suspicions that the teachers skewed the contest to favor Riley, seeing as Eric and I were two of three parents who arrived to witness it in action. That does not at all take away from how proud I am of our baby girl. She stood and spoke with confidence. She worked hard, and her hard work paid off. And what may seem to most as a silly little spelling bee will remain one of my most favorite memories of Riley.